Home > Case Studies > I Started Running in My 40s: A Case Study 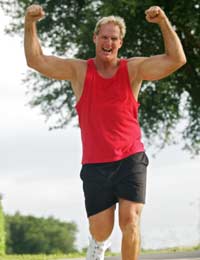 When Graham Hasby was about to turn 40, he decided to think a bit more seriously about his life. With a baby daughter about to turn one and hopefully more children waiting for him in his future, he intended to live to a ripe old age – if he could swing it.

So Graham, a management consultant from Birmingham, began to eat more healthily, cut down on his drinking – and embark on an ambitious exercise regime.

“I was about half a stone overweight and wanted to lose the extra pounds. But more importantly, I wanted to get fit so I could at least see my daughter reach middle age,” he said.

After thinking long and hard about what exercise to do, Graham finally settled on running – mainly as it seemed to be the simplest and easiest way to exercise, both in terms of preparation and fitting it into his schedule.

“Instead of having to drive down to the swimming pool or the local gym and have a shower there and take two hours over half an hour’s exercise, a 40-minute run takes 40 minutes from door to door,” says Graham.” And as I live near a big green park, that made it even easier.”

In the beginning, Graham ran too fast, and as a result always felt overly tired after a run. “Initially, I made the mistake of always trying to beat my previous time,” says Graham, who’s now 50, has two more daughters and weighs half a stone less than he did a decade ago.

“Then a friend who runs a lot gave me some good advice, and told me I was doing it all wrong. He said the key was to go slow, and to go even slower at the end of your run, not faster.

“That way works best – especially if you want to land up going again rather than using aches and strains as an excuse to not go for another run.”

Running With a Partner

Graham now runs three times a week, usually twice in the mornings before he goes to work, and once on the weekend. Sometimes he runs with a friend, but often he runs alone.

“It’s a lot more fun for me to run with people, but obviously that involves some logistics. And the great thing about running is that there is no organization needed. So I still spend a lot of my time running on my own as I can still fit it into my schedule easily.

“I have a work mate who comes and drags me out in the morning when she can. We run at a pace so that we can talk to each other, and that obviously makes running more enjoyable. She’s a couple of years older than me but she keeps in shape.”

Graham and his running partner never try to compete when they run, and in fact when he has run with an overly competitive running partner he soon found someone else. “Whether you call it fast jogging or slow running isn’t the point. It’s just a really convenient way of getting exercise,” he says.

“I go a maximum of three times a week, no more, to avoid injury. And I only stretch after my run, and not before. That means I only stretch when I’m warm, not when I’m cold, and that makes me less prone to injury. I found that helps a lot.

“Fortunately I don’t mind getting wet and cold, and as I don’t mind that form of discomfort running in the winter isn’t as bad as it could be for others. But you are much more limited as it gets dark early.”

Helps with Stress and Weight

Graham says that there is no doubt that when he is running consistently three times a week that he feels a lot better, sleeps a lot better and has lower stress levels.

“I’ve got hypertension, which runs in the family, and running helps keep that manageable as well. And running also definitely keeps my weight down,” he says.

“The great thing about running at a slowish pace for longer is that it burns fat. It really helps keep my weight where I want it. I basically eat what I want to eat and don’t have to worry about putting any weight on at all.

“When I retire I might go to the gym and get some strength work in. But running is just the easiest way to keep fit and still do a full-time job and look after three kids!”