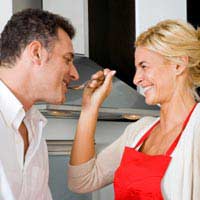 While men have long dated and married women much younger than themselves, society in general has tended to frown upon relationships between older women and younger men. However, as times change and women are becoming more empowered and making less conventional choices in terms of lifestyle, career, marriage and family, such ‘December – May relationships’ are becoming more and more commonplace – and even more accepted.

In fact, despite occasional accusations of “robbing the cradle” or the derisory use of the term “cougar” to describe a predatory older woman stalking younger men, relationships between older women and younger men are growing. In fact, a recent survey showed that one third of women between the ages of 40 and 69 are dating men younger than themselves by 10 years or more. Another survey by AARP showed that one-sixth of women in their 50’s preferred men in their 40’s.

Couples like Demi Moore and Ashton Kutcher – who might have once been the subject of contempt and ridicule – are now admired and emulated, as more and more women look to men a decade or more younger than them for their romantic and sexual fulfilment – and find the younger men very happy and willing to date and even marry women who are sometimes old enough to be their mothers.

Why is it happening?

The common assumption has always been that such relationships flourished because of sexual compatability – that older women enjoyed the greater stamina of younger men whilst younger men preferred older women in their sexual prime, with greater confidence in bed. However, in reality, this may not be all or even part of the reason. In fact, most of these relationships involve women beyond their 30’s and men beyond their teens – which are the supposed periods of peak sexual performance.

So what is it attracting these older women and younger women to each other? It is a mistaken belief that men only want young, svelte bimbos – in actual fact, many younger men prefer older women, finding them more interesting and knowledgeable and “fun” to talk to; more sophisticated and experienced, both in and out of the bedroom, and even more admirable in their career achievements and financial successes.

The older women, meanwhile, find younger men much more solicitous, entertaining companions. They are more adventurous and spontaneous and flexible about life and may also be more willing to support the women in their career and lifestyle choices. Older women also find young men not so tied to the traditionalist views of marriage and home with the standard 2.5 children and also less restrictive about gender roles.

Better nutrition and exercise options, combined with cosmetic procedures and products, not to mention medical advances and plastic surgery, mean that older women today are looking as good if not sometimes even better than their younger counterparts. This means that younger men are often not making a “sacrifice”, as judged in the conventional sense, when they decide to choose an older woman over a younger one. In today’s world, the older woman can more than hold her own against her younger sisters.

Despite the growing acceptance of older women – younger men relationships, it can still be a controversial subject in many social circles. In particular, there are still many assumptions and myths about the success (or lack of success) of such relationships. For example, one common myth is that the younger men will eventually leave the older woman for a younger model. In actual fact, surveys have found that this is rarely the case, with very few men choosing a specific younger woman they met over their existing older partner. The only approximation to this is in situations when the man wants children and the older woman is unable to have them, whereupon the relationship may fail but not because of a specific younger woman.

Another common myth is that such relationships are based on lust and will not enjoy the same permanency as “normal age gap” relationships – yet there are many couples (including several famous Hollywood ones) which defy this assumption. In fact, surveys found that the average length of older women-younger men relationship was 13 years which easily compares with more traditional partnerings. And finally, the common belief that the older woman is usually the seducer is wrong as well with most relationships initiated by the younger man who pursued the older woman.

The secret of success

The key to making such relationships work is much the same as any other relationship. Honesty is very important – too many older women fall into the trap of lying about their age when pursued by a younger man. Such lies can eat away at the core of an otherwise stable relationship.

Ultimately, success is less dependent on an arbitrary number signifying the number of years you have been on earth and more on compatibility. Finding someone who shares your views on life, your passions, your beliefs, your attitudes - even your energy – is far more important than someone who shares the same age.