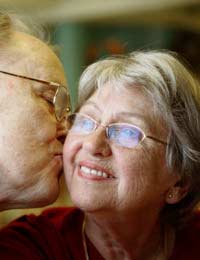 As women age, it is common that they will have to deal with a few sexual health issues. This is particularly due to the decrease in the female hormone oestrogen which occurs as women age and approach menopause – leading to problems like poor vaginal lubrication and decreased genital sensation. The male hormone, testosterone, is also believed to play a role and again, decreasing levels as women age lead to a decline in genital sensation, sexual arousal and orgasm.

While sexual difficulties can occur at any age, some problems are more commonly experienced later in life. These include:

Vaginal dryness can actually occur at any age and may be due to factors other than age, although it tends to be more common in older women. It is caused by a decrease in the hormones which maintain normal vaginal lubrication and vaginal tissue elasticity and acidity. The lubrication essentially protects vaginal tissue from damage and infection.

Menopause often brings about hormonal changes which affect vaginal lubrication, leading to vaginal dryness which in turn leads to pain during intercourse, as well as vaginal itching and pressure. All this can seriously affect sexual pleasure and desire and since lubrication is also dependent on sexual arousal, this can set up a vicious circle.

Luckily, many lubricants and moisturisers now exist on the market which help to relieve vaginal dryness and restore the comfort and pleasure of sexual intercourse. Other alternatives include Hormone Replacement Therapy, although this is only recommended for short term use as it is linked with an increased risk of heart disease, and Vaginal Oestrogen Therapy, which comes in the form of creams, rings or tablets inserted into the vagina to release a constant dose of oestrogen over time.

As women age, the network of skin, ligaments and muscles surrounding the vaginal wall tends to weaken in a condition known as vaginal prolapse. This leads to structures such as the uterus, bladder, urethra, rectum, small bowel or the vagina itself may prolapse and eventually “fall out” through the vaginal opening. This leads to problems with sexual functions and also problems with normal bodily functions such as defecation and urination, as well as discomfort and pelvic pressure.

About 30-40% of women will develop vaginal prolapses in their lifetime, usually following childbirth, menopause or a hysterectomy and most women who develop this condition are usually over 40 years of age. In general, vaginal prolapses will worsen with time and will only be fully corrected with surgery. This is the best option for sexually active women and is usually a very effective procedure.

However, it is also possible to treat a prolapse non-surgically through the use of drugs and medications (e.g., oestrogen replacement therapy) – however, this tends to be more appropriate for women who are not sexually active or who cannot undergo surgery for medical reasons.

A variety of other sexual difficulties can affect the older woman, although these are less directly related with ageing. These include Hypoactive Sexual Desire Disorder and Arousal disorders, as well as sexual dysfunction due to medical conditions associated with ageing, such as diabetes, heart disease, neurological diseases, hormonal imbalances and chronic diseases such as kidney disease or liver failure.

A slightly different issue is the loss of interest in sex, lack of sexual desire and a decline in the ability to become sexually aroused, often due to the emotional and hormonal changes accompanying menopause.

In some instances, the issues can be resolved through herbal compounds which have been used in native cultures for centuries. However, it is also best to consult a doctor first as effective treatment of sexual problems depends on the correct diagnosis of the underlying cause.